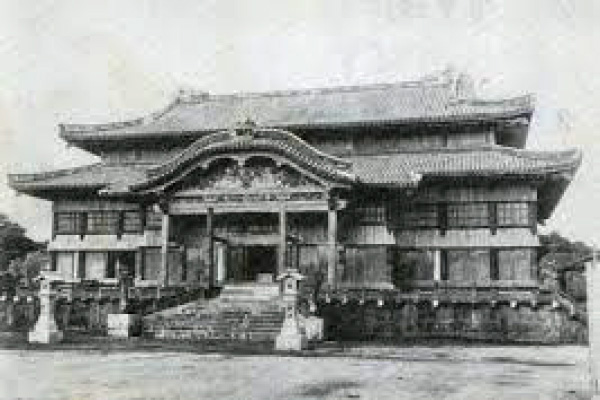 There are various theories about the origins of karate, but it is believed that the origin of today’s karate is a fusion of Chinese martial arts and an Ryukyu (Okinawa) original martial art “Te”. In the Ryukyu Kingdom, where the style evolved, many legendary karate masters were born, all of them passing down their skills and developing this traditional martial art.

In 1905, it was adopted by ITOSU Anko in the physical education department of Okinawan prefectural schools as well, laying the foundation for the public development of karate. After that, FUNAKOSHI Gichin gave a karate performance at the first Physical Education Exhibition, sponsored by the Ministry of Education, in Tokyo. It was very well received and many karate study groups were established in universities causing it to spread rapidly all over Japan.

FUNAKOSHI remained in Tokyo to teach karate, and at that time he changed the character for karate from its then meaning of “China hand” to the meaning we now know of “Empty hand” also introducing his spiritual and technical guidelines. By Funakoshi, many disciples, who would go on to be responsible for the subsequent development of karate, were raised. He died in 1957 and devoted his life to the expansion of karate.

In the aftermath of World War II, many of his students rejoined to help with the rebuilding of the karate world. In 1948, with NAKAYAMA Masatoshi and TAKAGI Masatomo in the forefront, the Japan Karate Association was established. The association succeeded in systematizing the rules and guidance for karate. In 1957, the first National Karate Championship was held and the foundation of today’s karate tournaments was created. In addition, Nakayama’s remarkable achievement was the establishment of a specialized instructor’s training centre and of sending first class instructors overseas one after another to expand the association. Since then, karate has developed as a worldwide martial art and has seen an explosive increase in the karate population.
Today, soccer and karate boast the world’s two largest bodies of athletes, and it is said that more than 40% of the world’s karate population has been influenced by the instructors of the Japan Karate Association.

ABE Keigo, one of those instructors, participated in many competitions with his samurai-like appearance and his brave fighting ability. In addition to his technique, which was faithful to the basics, he was also renowned for raising many more famous karateka and was well known as a master of Iaido (a martial art of the Japanese sword). From 1990, Abe became director of the technical bureau of the Japan Karate Association. After the division of the association, which occurred after Nakayama’s death, he went on to establish the Japan Shotokan Karate Association (JSKA) in 1999, centred around his own ideals, and he then taught actively around the world.
JSKA’s philosophy has been handed down to the present day, looking at karate from three aspects and aiming for a karate that everyone can study for the rest of their lives. His philosophy acknowledges, “Karate as a sport”, “Karate as a martial art”, and “Karate as a technique for a healthy mind and body”.

ABE passed away on the 21st December 2019 and NAGAKI Misturu, currently an 8th Dan, is appointed as the Chief Instructor of the Japan Shotokan Karate Association.